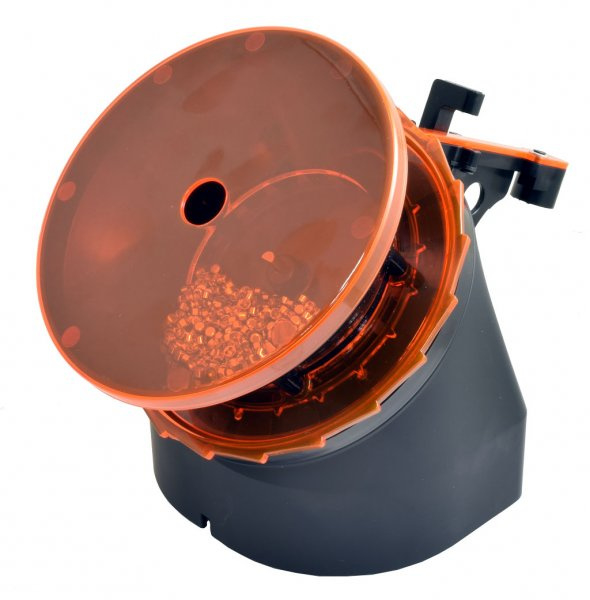 The PRIMER-PRO by Double-Alpha is a unique new approach to handling primers, and the solution reloaders have been waiting for!

As any reloader knows well, manually filling primer tubes can be the most time-consuming and aggravating step in the whole reloading process, and few good automated solutions exist.

The PRIMER-PRO by Double-Alpha is an innovative patent-pending design which departs from the traditional vibratory bowl solution used by all other automated primer tube machines. The PRIMER-PRO uses a collator type solution where the primers are allowed to exit the bowl through 20 precisely formed channels, ONLY if they are orientated in the correct direction (Anvil side up). If they are Anvil down, they will not pass through the channel, and rather slide back into the bowl as their channel reaches the top of the rotation, to enter again later, correctly oriented.

This rejection-type design makes it practically impossible for a primer to enter the output channel if incorrectly orientated, making this device extremely reliable. During development, we ran many successful tests in which 100 tubes were filled (10,000 primers fed) without a single up-side-down primer!

As the primers slide down the covered output-chute, they pass through an optical sensor which counts them and stops the collator once 100 primers have been counted into the primer-tube. The electronic processor board also monitors the sensor and is programed to stop the collator if, for whatever reason, primers hang-up on the exit hole and stack up along the ramp. The collator will be stopped before the primers stack all the way up and jam the collator. In such a case, the LED will flash quickly to indicate there is a problem. Once cleared, pressing the start button again will allow the collator to run and the count will continue from where it was stopped. Or alternatively, a long press on the button will start the count a new.

One of the most innovative design solutions of the PRIMER-PRO is the Output Actuator Arm, which is activated by a lever system off the Timing Disk at the bottom of the Collator Assembly. This Output Actuator Arm slides the primers from the bottom of the ramp slide, moving them over to above the output hole, holding them there for a split second to ensure they are static, horizontal and stable, and then retracting to allow the primer to fall cleanly down into the awaiting primer tube. This dynamic solution for the exit hole greatly reduces the chance of primers hanging up while exiting into the tube, a problem common with other automated primer fillers.

The PRIMER-PRO is currently available only for Smaller Primers, and handles Small-Rifle or Small-Pistol Primers equally well. A Large primer version may be offered in the future.

One Magnetic Collar for a Dillon Primer Tube is included with the unit. Since the PRIMER-PRO can refill a single Primer Tube faster than you can use the previous 100 primers in any reloading press, only one tube is strictly necessary.

However additional Magnetic Collars can be purchased separately, for those who prefer to fill multiple tubes before starting their reloading session.

The unit is powder by a 12v DC power supply (dual voltage, 110-230), which ships including a suitable European and US prong set (included). The power cord is 2 meters (6ft) long, and includes an ON/OFF switch in the cable.