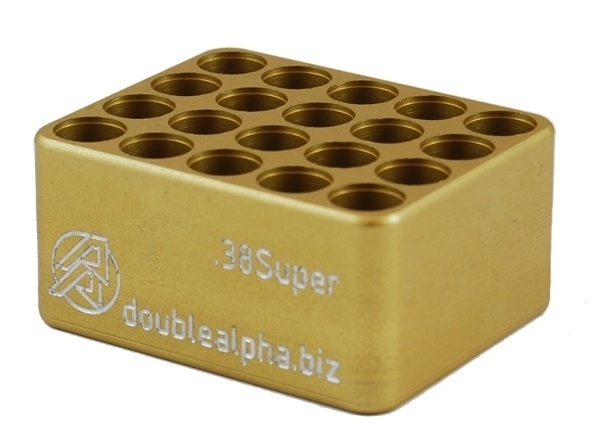 Any competitor serious about his shooting is aware of the importance of drop-testing one's bullets before a match. Since most malfunctions are ammo related, and most of those relate to deformed, bulging or otherwise defective brass - dropping the bullets into a gauge is an effective way to reduce the chance of a costly malfunction. The problem has always been that it takes time! over 15 minutes at least, to test 400 rounds with a single bullet gauge or using one's barrel. Well not any more!

These gauges are machined from top quality aluminium, and the pockets are finished using Clymer finishing reamers, the same which are used by top gunsmiths worldwide to cut the final dimensions on the barrel. The 20 pockets allow you to drop the rounds in a lot faster than into a single gauge, cutting your testing time down to less than half of the time!

A great deal of thought went into the dimensions of the block: The bullet pockets were positioned as close together as possible, to allow dropping 2 or 3 bullets in at a time, in the same way you would fill your ammo boxes. The height is purposely cut shorter than other gauges, so that the tip of the bullet head sticks out. If a bullet gets stuck, as reloaded ammo often does - you can simply push it loose from below with your finger, without having to pick up a tool.